Procrastination (Or Why You Can't Trust a Version of You from the Future)
I am so very guilty of this. In fact, I've spent all week procrastinating this post, which was in turn my excuse for procrastinating working on my short story. Very interesting take on why so many writers, myself included, put off writing that hard scene ("I may have no clue how to write it today, but surely Tomorrow Me will know just how to do it!")

Premise vs. Plot: Which Do You Have?
This could have been written exclusively for me. Premises come to me as easily and often as oxygen. Lately I've had about seven different premises vying for attention in my brain. Plots, however, have always been a different story. It often seems to come down to the fact that my characters prefer standing around talking to actually, you know, doing anything. I have no idea where they got that trait from *ahem* Anyway, this article breaks down the difference of plot and premise, has some handy tips on fleshing out an idea into a story. I've bookmarked this baby!

What Makes a Story Event a "Turning Point"?
Another article that could've been written just for me. As I said above, plot has always been a challenge for me. Sure, I can come up with things to keep the characters busy, but how to keep all those events from becoming a random mishmash of obstacles? Finally my writing mentor introduced me to what so many other writers already knew of, the "trigger." It's not just that events A, B, and C happen to the characters - it's that A happens because of the initial setup, B happens because of A, C happens because of B, and so on. This article explains it all in detail, and will surely be invaluable to me in the future.

As for my own writing, I've been battling the Demons of Self-Doubt and haven't gotten too far on the short story. I did go back and rework the opening, which I'm much happier with. Currently a bit stuck, but if I can silence (for a little while at least) The Voice telling me my time would be better spent organizing my sock drawer, then I can push through and get on with the story. Fingers crossed.

Also, Arizona has been the only state in the US not buried under a foot of snow, so I feel obligated to enjoy the sunny weather on behalf of all of my fellow writers. How's that for an excuse?
Posted by K. McKade at 4:49 PM 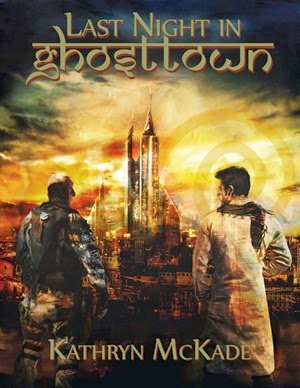 a sci-fi romance
Tweets by @KathrynMcKade